A thoroughly scary, sobering piece in the Metro Section of the New York Times has the Billy Rubin blog staff wondering what will await us in just about fourteen days. If the article can be condensed into one word, that word would be: apocalyptic. Nurses and (to a more limited extent) doctors are being sent into battle without proper gear, and anyone who reads this piece can only conclude that, as the tide crests, the lack of protection will consign not only some health care workers, but also some patients, to a very unpleasant and undeserved future.

Yet it is the opening picture that's the subject here: a nurse holding a placard saying "Will Work For a New N95!" It's a clever protest--clever enough to earn its spot in the Paper of Record--and one that expresses enormous anxiety among the doctors and nurses who have moved forth to do battle. Without N95 masks, the reasoning goes, health care workers are as lambs to the COVID slaughter. 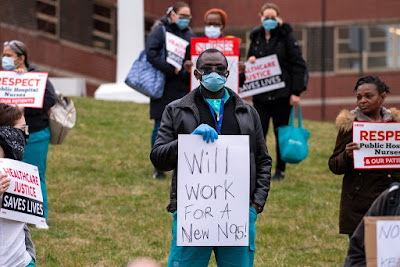 Except for one thing: that assumption is not, largely speaking, true.

What is an "N95"? The term derives from the National Institute for Occupational Safety and Health's categorization of face mask protectiveness. The "N" denotes that it isn't resistant to oils, but the 95 is the important bit, as it indicates that it filters out 95 percent of airborne particles. (There are 99 and 100-grade N masks, as well, in addition to "R" and "P" masks based on oil resistance, each with their own 95/99/100 gradations as well, for a total of nine different types of particulate protective masks. But the only one relevant for this discussion is the N95.)

The N95 mask is used in medicine for what is known as airborne precautions: when one is in the presence of a patient who may pass along an infection that can occur simply by breathing in local air. Two of the most well-known airborne pathogens are tuberculosis and measles. That is, someone with measles doesn't have to cough to infect another person, all they have to do is breathe and have someone in their vicinity. Once they breathe, the virus can remain in the air for hours. (Coughing, though, really throws infectious particles into the air.) The same is true for TB, although TB is not anywhere near as efficient at spreading. (Dr. Rubin has worked for years in TB-endemic places, with TB-positive patients, without the benefit of an N95 mask, and has yet to become infected with TB.)

N95s aren't cheap, and are generally only used in narrow circumstances like TB or measles. Most respiratory viruses do not spread by the airborne route, but instead by something infection control people call droplets. Droplet spread means that the virus or bacteria need to hitch a ride to something--usually phlegm, or the aerosols generated in a sneeze. Those loogies are governed by the laws of gravity, however, and so droplet spread means that, as long as you're not directly in the line of those aerosols or droplets (or, alternately, you're not touching the surfaces where such droplets dropped), they will quickly fall to whatever surface is closest, and as long as you're wearing a mask of some kind (like a surgical mask), you stand almost no chance of getting infected--and we'll get to the "almost" in a second.

The question then becomes: is COVID an airborne, or a droplet/contact-spread, virus?

Getting at this answer is less simple than it may seem, because there's different ways of answering the question. One way is to look at actual people who get infected--say, health care workers--and review whether they were wearing N95s or just surgical masks (which protect adequately against droplet-spread viruses and bacteria), and seeing whether there is a difference in workplace-acquired infections. But this isn't a perfect way of measuring the effect, since people can't be controlled the same way mice can be controlled in a careful experiment. Humans have a way of behaving in ways that confound the results. In the first 55,000 cases of COVID in Wuhan, the Chinese CDC in conjunction with the WHO found that many health care workers--some wearing N95s, others wearing surgical masks--became infected, which would suggest that this virus is mightily transmissible even with the most adequate protection. But then the epidemiologists in China looked at what was happening in the homes of the health care workers, and in a substantial number, they found that workers didn't get infected at work where they adhered to proper precautions, but they got the virus at home, when they reverted to less vigilant practices. (See page 11 of the report.) Thus, it wasn't at all clear whether N95 provided adequate protection or not.

Based on previous experience and study with coronaviruses, the World Health Organization felt that airborne precautions (that is, the use of N95 masks) were not necessary in caring for COVID patients unless they were generating aerosols. Thus, unless someone was doing something to a COVID patient that generated these aerosols, like intubating them, doing chest compressions, swabbing their throats, then a surgical mask would suffice. Which would mean that there should in theory be plenty of N95 masks in the world stockpile available for patient care. (Ventilators, unfortunately, are a different story.)

But a brief letter to the New England Journal of Medicine gave everyone pause when it noted that "aerosol transmission of [COVID]...is plausible, since the virus can remain viable and infectious in aerosols for hours and on surfaces up to days." Here's the pic that shows the scary data: 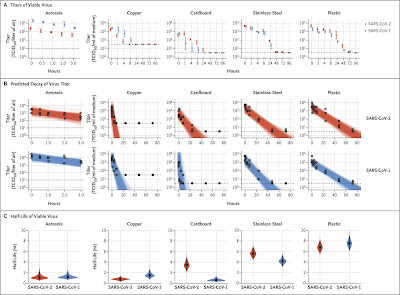 It's the middle, leftmost, red streak that suggests the ghastly conclusion: the decay of the virus when aerosolized--which is to say, the amount of virus in the air that can be picked up--was slow indeed, lasting for hours. You can see that its decline is much slower than seen in the other panels, which indicates the viability of the virus on various surfaces. The study immediately generated headlines suggesting that WHO had gotten it wrong (and, sort of by extension, the CDC, whose guidelines are subtly different but basically concur with WHO on the notion that there's no strong evidence for airborne spread).

But here's the relevant description from the article of how they designed the study. The authors state that "aerosols...were generated with the use of a three-jet Collison nebulizer and fed into a Goldberg drum to create an aerosolized environment" [my emphasis]. Moreover, the study didn't attempt to recover unambiguously intact coronavirus, but instead performed something called "PCR," which looks for the nucleic acid found inside the virus. It's an indirect, and strong, piece of evidence, but it's not, as it were, airtight, as broken up bits of virus can litter surfaces for hours and days long after intact virus can be recovered--thus getting a positive PCR test but being of little biological relevance.

Which is to say, this doesn't look anything like real life. It aerosolizes the virus, sure, but quite possibly in a way that no human larynx ever could, unless it was the Cough Heard Round The World. Thus, it's an interesting and intriguing piece of experimental science, but it's simply one piece of evidence in a quilt of information about how the virus is spread--and each individual piece of information does not have the ability to stand entirely on its own.

The experimental data adds a perspective, but the epidemiology gives real-life evidence of what happened, although that data too needs to be understood for its limitations. Even the lead author cautioned against over-interpretation of her work, noting in her Twitter feed the following: “Important: we experimentally generated [COVID-19] aerosols and kept them afloat in a drum. This is not evidence of aerosol transmission.”

But this nuance--this will come as a shock--has gotten completely ignored in the fevered rush to judgement and general freakout. And it's, you know, a kinda important nuance. Today's news brings another article even more extreme in its assertions--that an "MIT researcher" (they're smart!) is quoted in the New York Post as saying that COVID "can travel 27 feet and linger for hours." The "research" done to prove this? Turns out it's little more than a commentary, and describes no genuine new study designed to truly evaluate what happens when a COVID-infected patient is in a room with someone who is wearing a surgical mask but not an N95. In fact, it doesn't even deign to consider the strong epidemiologic data suggesting that N95s are unnecessary (with exceptions noted above). What it does show is...a video of someone sneezing. And what is its biggest citation? The very NEJM study described above. Which is to say, there's no there, there.

At the Billy Rubin Blog, we don't consider that to be the kind of science to merit headlines. We like articles like this, instead, that provide a whole lotta context about the question of airborne versus droplet spread. Good reading! And a lot less anxiety-provoking than the New York Post story.

Indeed, in this environment, when fingers are being angrily pointed, this seems to just pour kerosene on the flames. There are real outrages that have occurred as part of this epidemic, and for which many people are going to needlessly die. (See, for instance: Trump, Donald.) But based on what is currently known, there is not yet good reason to believe that there's anything shortsighted about public health officials suggesting that a surgical mask is, for the most part, safe for most situations involving COVID patient care.

The outbreak is moving fast, and that could change, but as of yet, the science isn't even close to being definitive that the N95 is required in all COVID situations.