I. I am not truly in the trenches, but I'm close enough to the trenches, and I do a number of reconnaissance missions to the trenches each day, such that I can get a good enough view of this beast. Everything I have read on the professional discussion boards, from Washington State to Texas to Louisiana, and above all, to New York, all check out. No disease is pleasant to behold, but some are worse than others, and this one, for those who are most affected, is bad. In the words of a colleague, "there's nothing subtle about this virus." Of course, he was referring to those who are in our intensive care units--it is precisely its subtlety among most infected people that makes it so difficult to contain.

But his point with respect to the sickest is spot on. The Cat scans do not require years of radiology training to elicit a gasp; they don't even require attendance at medical school, as this week's New England Journal images so amply demonstrate: 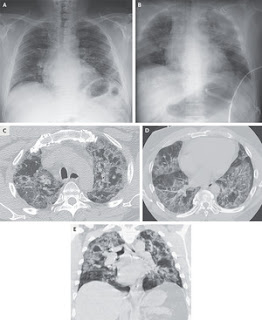 I have now seen three or four such CTs on patients I'm following; I expect to see more in the days to come.

II. The notion that this was some piddling, trivial virus should have all but evaporated once Italy and Iran exploded at the end of February, although even as recently as two weeks ago a majority of Republicans still found it untroubling. Wuhan was a warning, and Italy and Iran should have led any sane individual who was paying attention to realize that Wuhan wasn't a fluke--that the virus was moving fast, and that with a one percent lethal virus, one percent of a lot of people equals a lot of people. The math behind this was evident two months ago. Quibbling over whether the mortality rate was one percent or two percent or even 0.5 percent missed the essential truth, which is that the absolute number is what's staggering in a virus that can infect with such ease.

There is a virus well known to humans that should have taught us this lesson. Its mortality rate is an order of magnitude less than COVID, but its threat can be found in its extremely high transmissibility, for it is probably the most transmissible virus known to humankind. It is measles, and prior to the measles vaccine, it leveled children: only one in a thousand, which seems laughable, except that a child with measles can infect between 12 and 18 unvaccinated people. Millions of kids died every year, and even now, after a massive campaign that has reduced the mortality rate of measles by almost 75 percent, there are still nearly 150,000 children who die from the disease each year.

COVID's not that good at transmission--an infected person probably infects somewhere between two and three people--but it's good enough in an age of transcontinental travel to light up the globe in only two months.

III. There are at present three countries left in the world that do not have documented cases of COVID, and last week I was on one of the last planes out from one of them. Sometimes I do question my own sanity.

IV. I wonder if we had been lulled into a kind of virus stupor with COVID because we had been so acclimated to the fearsome case fatality rate of Ebola. Get Ebola, and until recently, it was basically flip a coin as to whether you lived or died. Actually it was flipping a trick coin, since the mortality rate was a bit more than 50 percent until finally we established that two specific treatments definitively worked. A one percent case fatality sounds so pedestrian compared to Ebola's case fatality that I wonder if it even caught the epidemiologists by surprise. At any rate, some historian in the years to come may want to juxtapose the initial response to COVID in terms of the deadening of a stimulus-response brought on by Ebola preoccupation.

V. Irony: I worked with Ebola patients during the West African Outbreak five years ago. I was millimeters from that virus. I examined patients while they sweat on my PPE, held them while they vomited and while they cried. I gave one of them back rubs regularly. I held their hands and walked them from the suspect ward to the confirmed ward. On occasion I stuck needles into their arms in order to draw blood tests. And during my time working in the unit, I slept like a baby. I was never scared of what I was doing. It wasn't that I thought I was going to be okay--far from it--it's just that I was able to approach my work with a calm that never abandoned me.

This thing? It's not so much that I'm scared, but I am definitely tense, and in a way that I never was in the Ebola Treatment Unit. The whole damn hospital is Hot--indeed, the entire state is Hot. And there is something grim and menacing about that.

VI. More on books to read another day, but if anyone wants to step back from the daily COVID cacophony yet still learn something about this moment in history in which we find ourselves, there may not be a better book than John Barry's The Great Influenza. It is impossible to read this book now without feeling a sense of deja vu. If you really do have the time on your hands, this is a good place to start--but more on some other pandemic/plague books worth reading another time.