Requiem For a Democracy (Maybe?): a Brief Meditation on the Day of the Election

One of the memes circulating in a small eddy of the internet is the "Fauci scale": 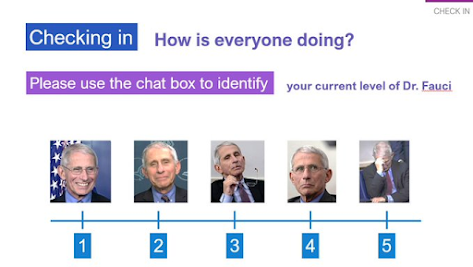 Heading into the election, Sam Wang of the Princeton Election Consortium assesses himself between a two and three (though noting complex feelings such that it's more like 2.5 + √-1).

My own personal take is that anything below a Fauci 4.0 is foolhardy. The scale is relativistic, of course: by the standards of the Zaire Presidential election of 1984 (a phenomenally corrupt "election" that defines the term "rigged") the 2020 election could be nothing other than a Fauci 1 (or at least Fauci <2.0). And compared to, say, the Ukranian presidential election of 2004, in which the opposition candidate (and eventual winner) Viktor Yushchenko was poisoned, we're still doing okay, maybe in the Fauci 2 range.

But by traditional American standards, I can't see how anyone who has been following US national politics since 2016 can regard tomorrow's election as anything better than a Fauci 4. Personally I'm at a Fauci 4.9 at the moment. Even if we can find our way to a Biden administration in January, democracy in the US has been badly damaged, and in ways that will not quickly abate.

The contours of the presidential race have been remarkably consistent for weeks, with Joe Biden showing a commanding lead over Donald Trump, both in the national average and in the Electoral College. If the numbers are even remotely accurate, it would take a statistical miracle for Trump to repeat his narrow 2016 Electoral College victory.

It is here where many people might raise their hands to note that "the polls got it all wrong" in 2016 and to urge extreme caution in interpreting the current poll results. But by and large, the presidential polling wasn't "all wrong," and arguably hit the nail on the head for the national overall vote: the Real Clear Politics average of polling showed Clinton ahead by 3.2 points on election day; she went on to win the popular vote by 2.1 points, 48.2 to 46.1 percent, which is well within the error range of the accumulated polling.

It's true that at the state level--especially Wisconsin, and to a smaller degree, Michigan and Pennsylvania--there was a lack of sampling. The undersampling, coupled with James Comey's "October Surprise" announcement of the discovery of previously unknown (and ultimately, unimportant) Clinton emails saved to an unsecured location, proved to be enough of a difference in the late-breaking vote that Trump eked out a victory in those three critical states with razor-thin margins of 22,698 votes in Wisconsin, 10,704 votes in Michigan, and 44,292 votes in Pennsylvania. Those three states, with 13 million voters, swung the national election to Trump with fewer than 100,000 votes cast. And even in these states, the polls reflected a tight race, as can be seen here in the Wisconsin polling:

Michigan and Pennsylvania show similar trends. One can reasonably conclude from this that, under normal circumstances, Biden holds a commanding lead heading into the final hours of the campaign, and is in a significantly stronger position than Hillary Clinton was four years previously.
We are not operating under normal circumstances, of course. The fact that we are in the midst of the worst infectious disease outbreak since the Great Influenza of 1918 (yes, that one was worse, and yes, there were other horrible outbreak years as well) is only the beginning of the laundry list of known unknowns that will affect how many people vote, and how many of those votes will count.

That laundry list includes Trump whipping up his Brownshirt brigade bent on voter intimidation (though perhaps they may be less worrisome than previously thought). It includes the army of forked-tongue lawyers making every possible argument to suppress every vote from Democratic party strongholds (and whose arguments are often so transparently antidemocratic--small "d" there--that as a warm-up exercise, the Republican-installed Texas Supreme Court refused to toss out more than 100,000 legitimate votes simply because election officials in Houston tried to make it safe and easy to vote by means of using drive-throughs). It includes the sabotaging of the US Postal Service by its own head in an effort to delay mail-in voting so that the will not be eligible for the count.

At some level, these kinds of threats to democracy are common fare in American politics: voter suppression is nothing new, everyone is familiar with the Supreme Court's 2000 decision to prevent the recount in Florida, and leading Republican politicians dating back to at least the 1960s have a track record of not merely sanctioning, but leading the efforts to prevent free and fair elections. This group includes such luminaries as William Rehnquist, who led an organized effort to intimidate voters in his native Arizona in the 1960s long before becoming Chief Justice of the Supreme Court of the United States (appointed by--this will come as a shock--Richard Nixon), but the list is much longer and runs right up to the present moment, where one Kris Kobach, the far right former Governor of Kansas who proved even too radical for that extremely conservative state, heads the Orwellian "Presidential Advisory Commission on Election Integrity. It may be too rosy an assessment to say the American experiment triumphed over these kinds of borderline fascist tactics that now define the Republican party at virtually all levels (with notable, but unfortunately far too small, pockets of resistance in places like Massachusetts, Vermont, Maryland, and perhaps Utah), but I think it's reasonable to say that, for personal freedoms and having the voice of the people heard, it's still better to be here than, say, China.

The absolute dread that is rippling across the United States today, and no doubt in the days to come, is nonetheless very real, and in my opinion, exceedingly well placed. Many highly informed people who understand civics at a deep level have gone to great pains to reassure the public that Trump will be unable to "steal" the election via his typical blunt, and not especially clever, tactics. "We cannot say that this is an entirely impossible scenario," noted the authors of electoral-vote.com a seeming lifetime ago on August 5. "What we can do, however, is make clear that it is very, very unlikely." (The link is worth reviewing for those who want to understand the mechanics of how voting for President in the US actually works.)

Maybe so, but I fear that Trump's ability to deny obvious realities, and to drag not just millions, but tens of millions of people with him into his madness, has the potential to gum up the works in ways that no expert of the past could possibly predict the future. Electors are chosen by processes that vary from state to state. Many of those states have divided government. Here, for instance, is a map showing the legislative control of each state: 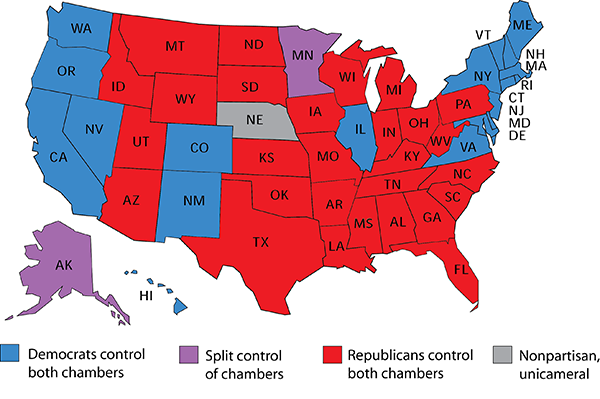 Note that Donald Trump simply discards reality whenever he finds it inconvenient--which when it comes to political topics, is virtually always. For a moment, just forget legal challenges to the courts to close the polls early, or to have this or that set of votes not count: what is to stop Donald Trump from saying that he won Georgia, Florida, North Carolina, Pennsylvania, Michigan, Iowa, and Wisconsin, regardless of the facts on the ground? (There is good evidence to believe that he will declare victory this evening no matter what happens.) As you can see, all of these states have a Republican-controlled legislature (some also have Republican governors). There is a process for certifying the winner of the federal elections in each state.

What is to prevent these legislatures from simply declaring, by fiat, that Trump's electors will represent their states? What happens when those electors get in their cars and drive to Washington on December 14? (Note: this has happened before.) Who is to adjudicate this kind of mess? Do you trust Samuel Alito, Clarence Thomas, John Roberts, Brett Kavanaugh, Neil Gorsuch, and Amy Coney Barrett to be fair judges should legal questions land in their laps?

I for one do not. Nor do I trust any Republican office holder at the national political level. All evidence--including an easy opportunity for the Republican leadership to stop Trump via impeachment when evidence of obvious malfeasance surfaced, something that happened only eight months ago--suggests they will follow him no matter where he leads them. Since 2016, the Republican politicians who can see Trump for the dangerous buffoon he is have almost never taken any direct action against him; they express, at most, "concern" about his trampling of democratic norms, or more often, simply run away from the subject when simple and direct questions are asked of them. And it is worth noting that we're only talking about the rump minority of the Republican party secretly disgusted by Trump; the rest are hollering enthusiasts.
It may come to pass that there will be a happy outcome and the US experiment in governance will dodge this bullet, but I for one remain wary of what lies ahead in the coming hours and days, and while I remain hopeful that the democratic institutions Trump has only partially dismantled will prove up to the task, I do not think it is by any means assured, and I wonder what any sane person will do, individually and collectively, once Trump leads his cult jumping into the abyss.