While a picture may be worth a thousand words, sometimes one word can stand alone without the assistance of the other nine hundred ninety nine. 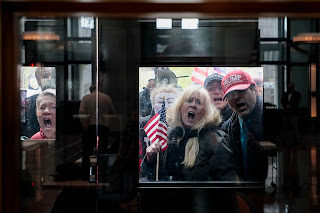 In the case of this picture above, which displays the raw emotions of Midwestern Trumpistas as they literally shout about their states' governments decisions to maintain a lockdown policy in the face of the COVID outbreak, the one-word description can be: Brownshirts.

In case you aren't familiar with that reference, here's a primer on the Brownshirts. Money quote: "Violent and often disorderly, the SA were primarily responsible for the protection of leading Nazis and disrupting other political opponents’ meetings, although they often had a free rein on their activities." The picture above is from the Statehouse in Columbus, Ohio, but this could just as easily be from Berlin or Munich in 1932.

At any rate, as I have been thinking about this blood-chilling picture, and of how Trump has (again) whipped up his mob as a means of throwing a temper tantrum when confronted with the reality that his power is not, in fact, absolute, it occurred to me that these "protests" he has "encouraged" can be likened to one of the most famous experiments of psychology from the 20th century.

The research is commonly known as the marshmallow experiment. In the popular understanding, the experiment was designed to evaluate whether a child could delay the gratification of having one tasty treat (marshmallow, pretzel, cookie, whatever) by holding out a full fifteen minutes, at which point they would be given an additional one. The experimenters tracked the children through time, and what resulted was the surprising finding that those who were unable to delay gratification had worse outcomes in what the authors refer to as "cognitive and academic competence and ability to cope with frustration and stress in adolescence." In other words, the inability of some children to restrain themselves predicted a less happy and more troubled life.

It turns out that, as with many other popular understandings of psychological research (like, say, the infamous Milgram experiment), the story of the marshmallow experiment is not quite as straightforward as is often portrayed. For one, the researcher who designed the experiment, one Walter Mischel, has noted that what people have assumed about the experiment is almost the polar opposite of his philosophy of psychology. The point of the study, he argues, was to demonstrate that children could change their behavior with the proper help--that is, with a few mental tricks helpfully provided by the adult, they could in fact wait as long as their classmates. Moreover, other researchers have been unable to replicate Mischel's findings, casting doubt on whether the results, and the conclusions on which they were based, were valid.

None of which is especially relevant here. What is relevant is that the question of when to re-open the economy in the midst of the COVID outbreak has become, in effect, a giantic, multi trillion-dollar marshmallow experiment, and what we have witnessed, from the President to his thus-far-still-hapless-but-nevertheless-menacing MAGA/Sturmabteilung troops, is the need for instant gratification run amok. The parallels aren't perfect, of course: there will be nothing "tasty" to the one-marshmallow scenario of returning to life too soon, and even the "two marshmallows," for which the waiting is necessary, is merely a best-of-many-bad-options scenario. But it does frame the actions of the President and his horde of thugs as a massive, collective expression of infantilism of the most lethal sort.

Postscript: a friend writes, brilliantly, "Trump is the most dangerous kind of damaged-child-in-adult-body. He would've just stabbed the researcher, stuffed the whole bag of marshmallows down his pants, and gone home." Ha!
Posted by Billy Rubin at 1:44 PM