Evolution Ain't a Ladder, and We Ain't at the Top

The idea that we humans are the most privileged, most developed, most special creatures on earth has been around, of course, a very long time, further back than when the Bible creation stories came into being, further back than Gilgamesh, probably further back than when some guys took to painting on a wall at Lascaux. Since Darwin, though, we've known better: humans are just another species trying to make its way in the world, quite intelligent to be sure, but no more or less special than, say, a bacterium happily living in the soil.

But thinking of ourselves as the Most Special Species--where evolution is a ladder and the top rung is occupied by humans, who preside over all life much like Adam on the Seventh Day--has been hard to root out. Even intelligent and thoughtful people can fall into the metaphor in the midst of an otherwise lucid discussion about science. Such a thing happened today when Gina Kolata, the science writer for the New York Times, was writing about some new research on the killer bug Staph aureus.

Ironically, when I saw the article I thought that it would make a great blog entry from the perspective of how warped laypersons' perceptions are about the relative dangers of various microbes. Even those only with a nodding acquaintance with science often have heard of Ebola, no matter that Ebola is a very rare disease and no human case has ever occurred in the US (not from the lethal strains, anyway). Staph, meanwhile, which is an outright killer, was barely known outside of medical circles until the past decade, when the drug-resistant staph strain MRSA was the culprit in various outbreaks, including a famous outbreak among the St. Louis Rams football team. I often feel like I could have summarized the major clinical take-home point of my fellowship in Infectious Diseases in two words: "Staph kills."

Alas--a more in-depth discussion about the warped perception the public has about various diseases will have to wait, because Kolata fell into the we're-on-top ditch midway through the article. While discussing the predilection that Staph has for human blood over other animal species, Kolata wrote, "Staph definitely preferred human blood...but there also was a definite trend, the higher up the evolutionary scale an animal was, the more the bacteria liked its blood" [my emphasis]. But Gina, it just ain't so! Those creatures whose blood was more liked by Staph were more closely related to humans on the evolutionary tree, but not higher on a scale, not more "advanced", not more worthy of the description "living thing." Evolution allows for adaption to particular living conditions, and the creatures that occupy each niche are all equal. The best way to visually think of the web of life is as a two-dimensional non-vertical tree (the vertical version, with "man" at the top, can be found in an exemplary drawing from the early 20th century below). We're just hanging out at the end of a branch like every other living thing. 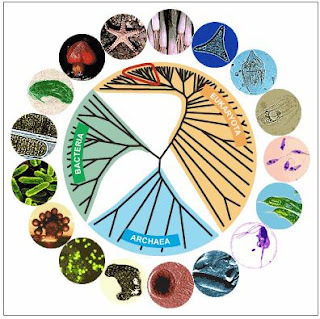 Tomorrow, a brief commentary about this Reuters piece announcing a "cure" in an HIV patient. While the facts are true, the message is deeply misleading.
--br
Posted by Billy Rubin at 7:15 PM