The Dark Side of Medicine, in Corporate Form

Carl Elliot, a physician by training and currently a medical ethicist at the University of Minnesota, might have been pleased, in a twisted way, to hear the recent revelations about the US government's research project in Guatemala in the 1940's where physicians deliberately attempted to infect prison inmates, patients in mental institutions as well as soldiers with syphilis. After all, when you're writing a book about how the machinery of medicine can be used for unethical behavior, how much better can you do than by getting some free publicity from a news story about truly outrageous behavior by doctors employed by the feds? 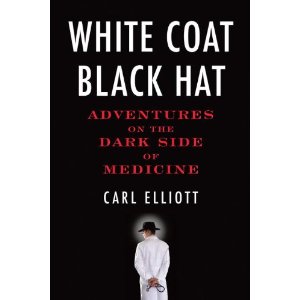 There is one major difference between Elliot's thoroughly-researched book and the Guatemala Syphilis Experiment story, however: most of what Elliot documents is corporate-driven malfeasance, while the Syphilis study was done at the behest of government and, however wildly misguided its aims, with national security in mind. The bad behavior that goes on today in the medical research world is done in the name of the almighty dollar.
Elliot's title might seem a bit misleading--at first glance, I thought it was the memoir of a Chasidic Jew in the world of secular medicine--but White Coat, Black Hat more than makes up for it by painting a picture of just how the system of medical research, in particular pharmaceutical research, can be gamed by savvy corporations whose bottom line often doesn't overlap with patient needs. And a pretty picture it ain't. Elliot acknowledges in the introduction that he is not trying to paint a balanced picture of how the entire system works, and that he assumes there are many corporate-employed researchers as well as executives who really do want to succeed in business by making better drugs for patients ("There are still plenty of honest doctors out there. But honesty is getting harder all the time."). He does, however, aim to review the known abuses to give readers a sense of how patients and doctors alike can be conned, sometimes with lethal consequences.

The book dissects the system from the standpoint of the various players within it: he looks at "guinea pigs" (research study volunteers who have turned being a serial study subject into a most unusual professional career), "ghosts" (writers who author medical manuscripts), "detail men" (drug reps), "thought leaders" (MDs who have turned into shills for the companies), "flacks" (the corporate execs) and "ethicists." Throughout every step he recounts the half-truths and highly iffy behavior of pretty much everyone involved, and what happens to the careers of those whose ethical misgivings finally override their desire for wealth and admiration, leading them to speak out. The short version is that while it's not wise to mess with these entities, but it's decidedly highly unwise to mess with them after you've sucked at their teat for a few years.

For those who follow the New York Times regularly many of these stories won't come as much of a surprise, but when collected together the portrait does have a rather compelling effect, a bit like the difference between the distate one experiences when seeing one cockroach compared to watching the scene with Harrison Ford in Indiana Jones and the Temple of Doom when he discovers that the walls are enitrely covered with creepy-crawlies. Yes, the bugs probably aren't going to kill you, but the more you shine a light on them and discover how abundant they are, you can't escape the overwhelming sense of contamination.
--br

PS--On the subject of Chasidic Jews and good timing--bravo to Carl Paladino! The Republican candidate for the Governorship of the State of New York couldn't have timed his ranting anti-gay speech better. In an address to members of the Sha'arei Chaim congregation (that's "Gates of Life" for non-Tribe members out there) that was greeted by applause, Paladino said, "I just think my children and your children would be much better off and much more successful getting married and raising a family, and I don’t want them brainwashed into thinking that homosexuality is an equally valid and successful option — it isn’t." Nicely done, Carl! Especially within days of the ugly revelations of the targeted assaults of gay men in the Bronx. Carl, you may be aware, is a fine example of the G-rated squeaky-clean right wing candidate who likes to decry the sexual lewdness of a permissive culture, until it turns out that he's not so squeaky-clean, as the revelations of e-mails containing bestiality and racism surfaced earlier this year. In Paladino's case, the revelations came months before the anti-gay speech. I'm not following the NY Gov's race close enough, but it smacks of someone trying to change the subject. Ladies and Gentlemen, the Tea Party!
Posted by Billy Rubin at 1:16 PM