A Parting Shot For Black History Month, Through the Medicine Lens 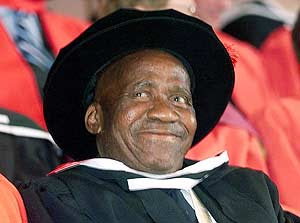 Readers here will no doubt be familiar with the ongoing debate, such as it is, about the appropriateness of the very concept of Black History Month. On the one hand, proponents view the exercise as an opportunity to have a specified time devoted to PR for accomplishments of Americans of African descent, which have been traditionally neglected or downplayed. The opposing view, largely and most vociferously argued by cultural conservatives, argues that Black History Month is something of a "cultural entitlement," with their reductio ad absurdum going something like: well, if there should be a Black History Month, then there should also be an Italian-American History Month, and a Korean-American History Month, and a Handicapped Women's History Month, et cetera. Obviously these are the boiled-down, oversimplified forms of the arguments, but that's the general gist.

Billy has no particular dog in this fight, regarding it with about the same low level of interest as he does other topics that once inspired fierce passion in him, such as whether or not the child of a Jewish father but not Jewish mother can be regarded as a "true" Jew. One particular reason that Billy cares not a whit for being neither a booster nor a detractor of Black History Month is that he remains fascinated by and committed to learning about the culture of African-Americans the whole year round. He considers many cultural monuments of America to be the product (or province) of "Black" America--among them the greatest novel (Song of Solomon) and its greatest writer (Toni Morrison), the greatest film (Do The Right Thing), arguably its greatest musician (John Coltrane), and the greatest television series to date (The Wire)--so arguing about whether or not there should be a Black History Month until one's face becomes blue seems a waste of precious time. He has no real objection to it, and as his interest in African-American culture is constituitive, he has no real enthusiasm for it either.

However, Black History Month does provide Billy with a convenient excuse to tell the story of one of his mini-heroes in medicine. As we leave February allow me to quickly sketch out the story of Hamilton Naki.

Naki (1926-2005) was born and raised in apartheid South Africa, about which no elaborations are needed. He was fortunate enough to be employed as a gardener at the University of Cape Town, where he toiled for ten years until he managed to change jobs tending the animals and performing other basic janitorial duties at the medical campus. According to a brief biographical sketch, he became directly involved with surgical procedures when one of the faculty, Dr. Robert Goetz, asked him to hold a giraffe while he operated, and given his reputation for industry and meticulousness he soon came to assist such procedures at more sophisticated levels. (Internet-info reliability warning: while most of the details of Dr. Naki's story are well-sourced and available in reliable publications such as the NY Times, Washington Post, and The Economist, the story about the giraffe is the one yarn that does seem to possess the odor of implausibility, and Billy recommends readers take it with a grain of salt.)

What is beyond dispute, however, is that he did indeed become increasingly involved in more complicated procedures, and over a period of years came to be the equivalent of a faculty member, training a generation of surgeons at the University as a lecturer and a hands-on mentor, teaching operating techniques. Given that this all took place in mid-century apartheid South Africa, and that his official status never rose beyond the title of "gardener," it's quite a story.

That story is known to posterity (and includes an unfortunate twist) because of his association with Dr. Christian Barnard, the surgeon who performed the first heart transplant in 1967. Although there is no evidence that Naki had any direct involvement in that procedure--see below--Barnard himself noted the critical importance that Naki had to the transplant program and his role in training surgeons. "He probably had more technical skill than I had," Barnard is supposed to have said before his own death (sorry, I don't have this sourced). If true, those in the biz know what a remarkable statement it is, given the generally non-magnanimous nature of cardio-thoracic surgeons, particularly one who made his bones, so to speak, in the 1960's.

Naki retired in 1991, and his accomplishments gradually became well-known in post-apartheid South Africa, such that he received an honorary doctorate from the University in 2003, two years before his death. By that time the story of Dr. Naki's accomplishments had become embellished to the point where he was described as being Dr. Barnard's primary assistant in that first heart transplant, such that Dr. Naki had publicly stated it was so. Initial obituaries of Naki repeated this yarn, and at least one subsequent correction in The Economist appears to have been rather over-the-top, in Billy's opinion, in its need to dis-entangle itself from the lie. Whether Naki came to believe the matter himself, or simply felt pressured to exaggerate his own incredible story, is lost to the ages, but Billy for one remains awestruck by the heights to which one man rose in about the least hospitable environment one can imagine, and will remember that that is his true legacy.

UPDATE: On the Provider Conscience Rule front, President Obama seems to be moving toward rescinding that noxious piece of legal work. We can only hope for a swift reversal. Details here.

Billy's got some article- and grant-writing to do in the coming weeks, so check back here by the ides of March and we promise to have more grist for the mill.
--br
Posted by Billy Rubin at 3:26 PM