The staff here at Billy Rubin's Blog have taken as their creed something like this: the mass media warps people's perception of medicine, thriving on keeping their readers and viewers in a state of near-constant fear about the various little microbes and other health risks that can do them in at a moment's notice. Our goal is to bring a little perspective to this constant onslaught of scare-mongering, and as such we prefer not to talk about "scary diseases," finding such terms sensationalistic nonsense.

That said--and in a blog just two weeks old, no less--today's topic will be something that the Doctor considers to be genuinely scary: the influenza virus. Most people aren't as scared of flu as they are of, say, flesh-eating bacteria (the danger of which Doctor Rubin thinks is wildly inflated even in the best of circumstances), and yet they should be. Partly due to his own encounter with the bug in his mid-20s, when he endured a three-day stretch where death seemed like a preferable option to continued suffering, partly because as a physician he has seen people--young and old, healthy and ill--succumb with eerie speed to this virus, he maintains a healthy fear of influenza and recommends everyone else do the same. By "healthy fear", he means that everyone should get their flu shot, pure and simple.

Last year's flu season in the US was particularly disturbing. The CDC reported just under 40,000 confirmed cases from October through mid-May. Keep in mind, though, that that number represents only the cases where the patient came to medical attention, and that the test was performed accurately (the nasal swab to test for flu has to be inserted deep into the nose, which it often isn't, leading to a high false-negative rate), so the true number almost certainly is a good deal higher than 40K. Moreover, the sheer aggressiveness of the virus can be seen in this graphic supplied by the CDC in this report. The graph represents the deaths caused by influenza and pneumonia as a percentage of overall mortality; the red line shows the actual percent, while the black lines show the threshold at which the public health guys & gals declare an epidemic. You can see that 2004 and 2008 were bad years, while the intervening three seasons were fairly mild (the arrow in the middle notes the epidemic threshold line): 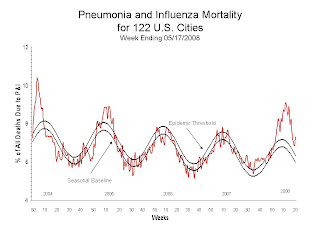 All of which is to say that this year, the flu is not nearly as bad. At least in the US. On the other side of the pond, Europe is getting slammed. Bloomberg has an article that does an admirable job of describing in detail the nuances of influenza infection, its complications, the various strains involved and how vaccines are made, and drug resistance, all within 1200 words. It's impressive. Would that every medical story be written this well. Then again, Doc Rubin would be out of a blog.
--br
Posted by Billy Rubin at 6:50 PM

Email ThisBlogThis!Share to TwitterShare to FacebookShare to Pinterest
Labels: influenza